I’m finally back on the blog!  Life has been running from one project to the next with chairing a conference in April and planning leading up to that, leaving the country for two weeks, catching up with work, having C back for a few weeks, and finally realizing I have done nothing with my pictures!

So here goes the story – it is a tale of mostly food, but that is what happens when I go on vacation… the life of a dietitian revolves around food.

At the beginning of May, we left the old US of A and flew to Toulouse France – C was there for a conference and I decided to tag along for fun before we would continue the adventure. Toulouse is a fantastic unversity city of about 1 million people. Because of the university it’s vibe was very welcoming to foreigners – lots of different ethnic foods (although we ate mostly French cuisine), many if not most people could speak some English since our French is terrible (the translate app saved my life), and the compact city center was easy to get around.

The first night we ate at Brasserie De L’Opera which was close to the hotel and quite good. I ordered risotto which I thought came with chicken… it didn’t look or really taste like chicken, later I learned that word was fish – which makes what I ate some sort of fish sponge? 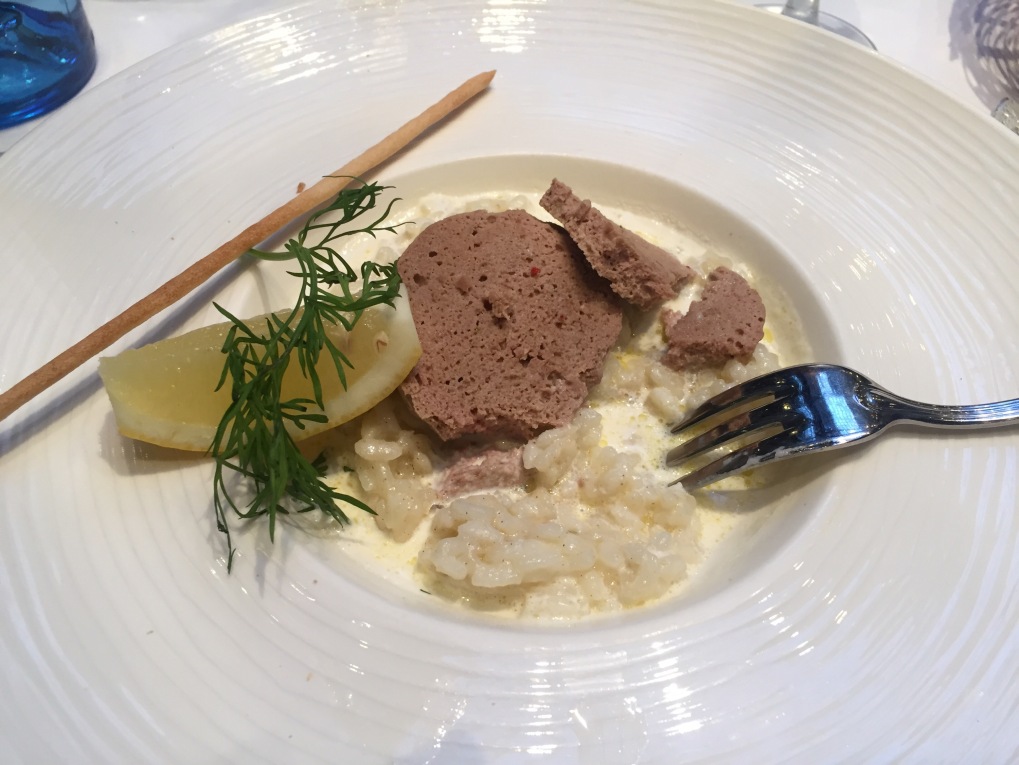 Dessert was an apricot mousse with lady fingers, kind of like a tiramisu. Great way to kick off vacation! 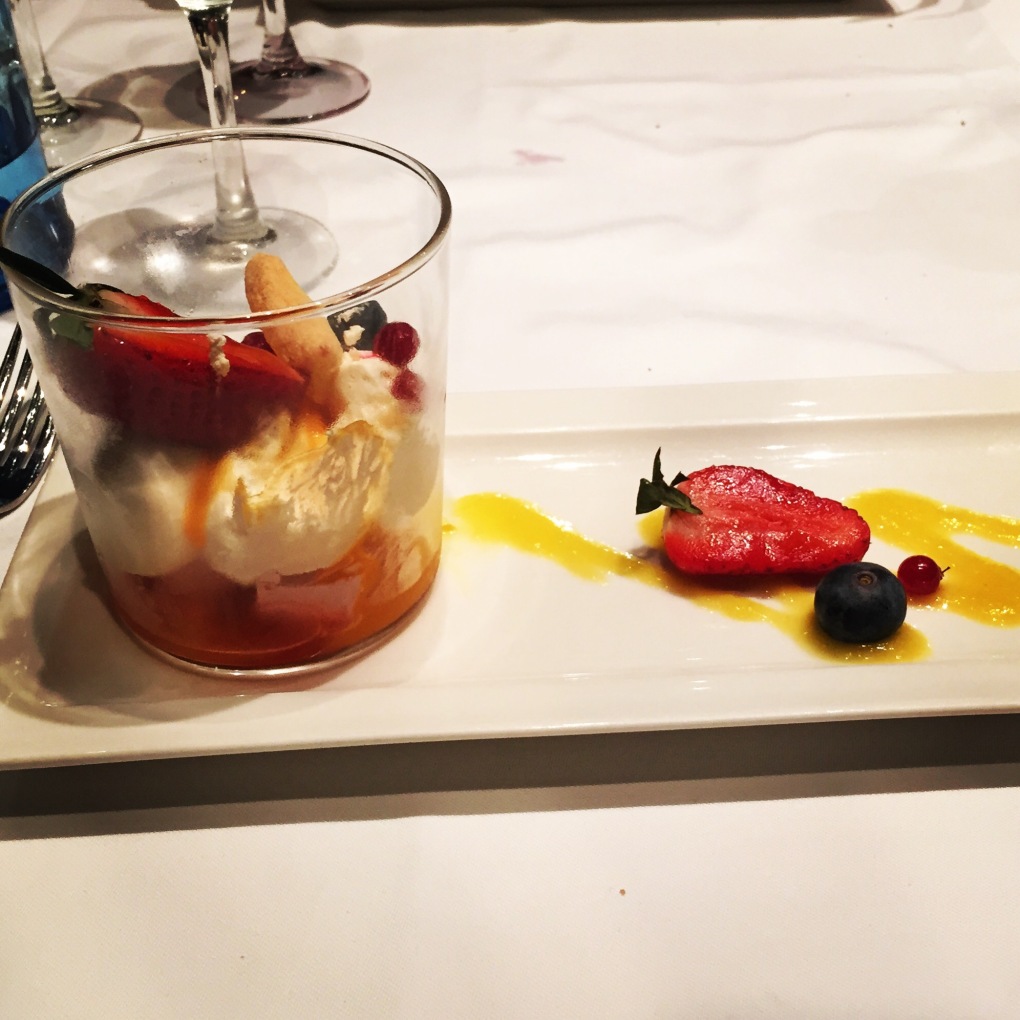 Here are some more city shots before I talk about food for the remainder of this post…. 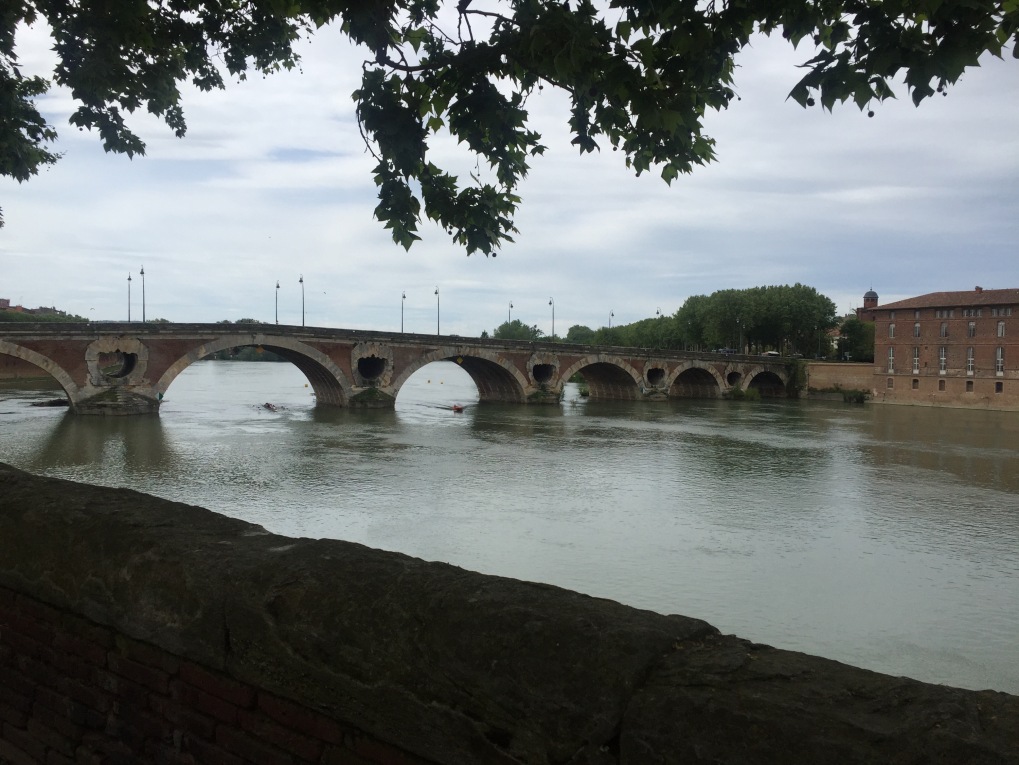 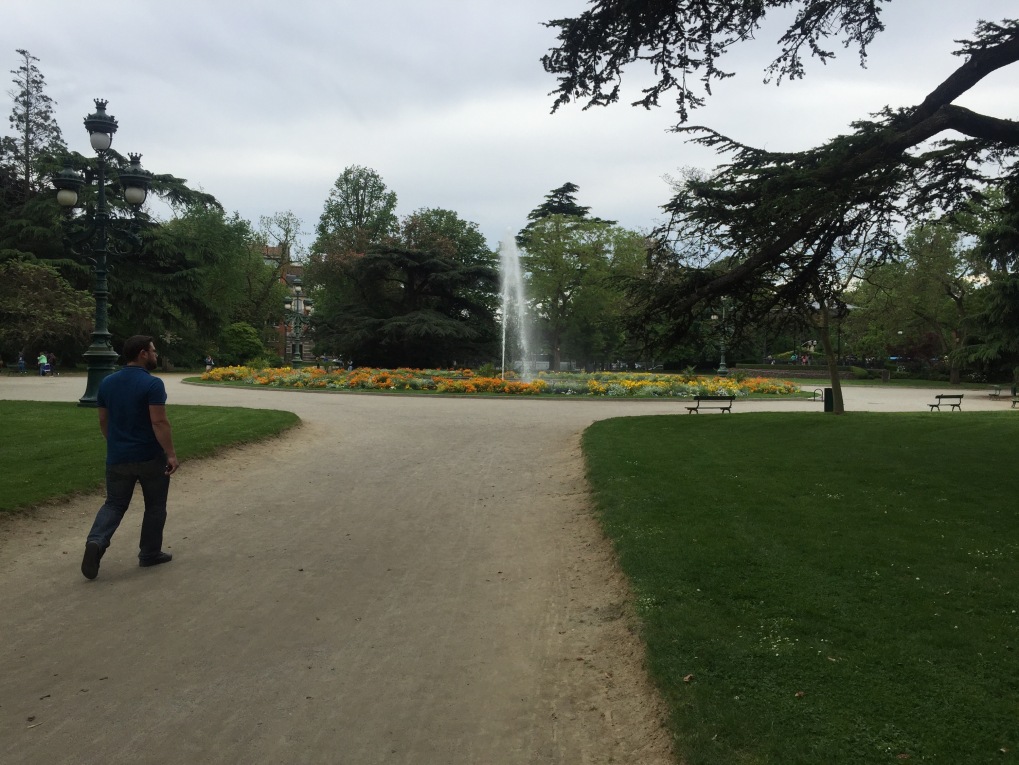 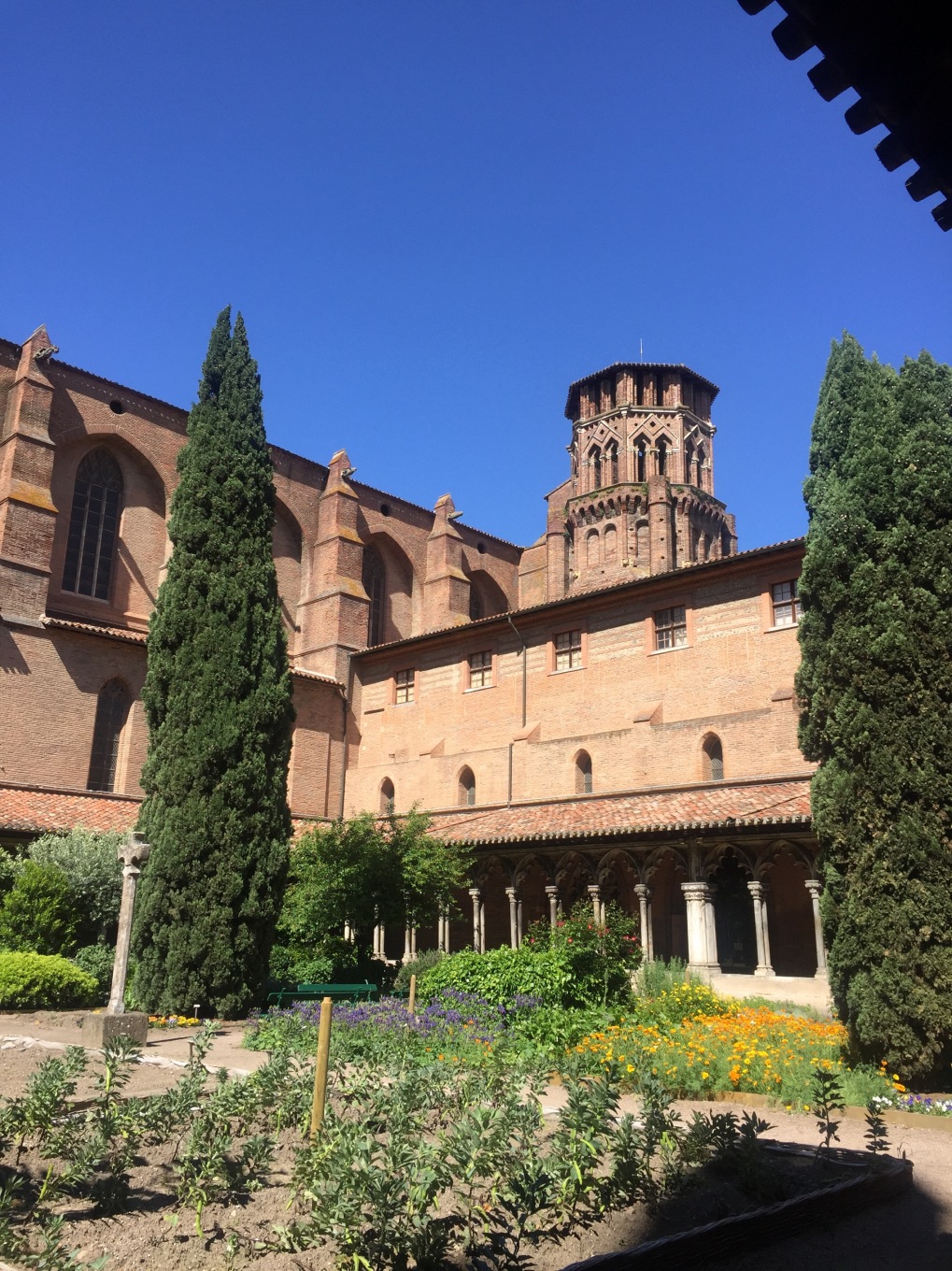 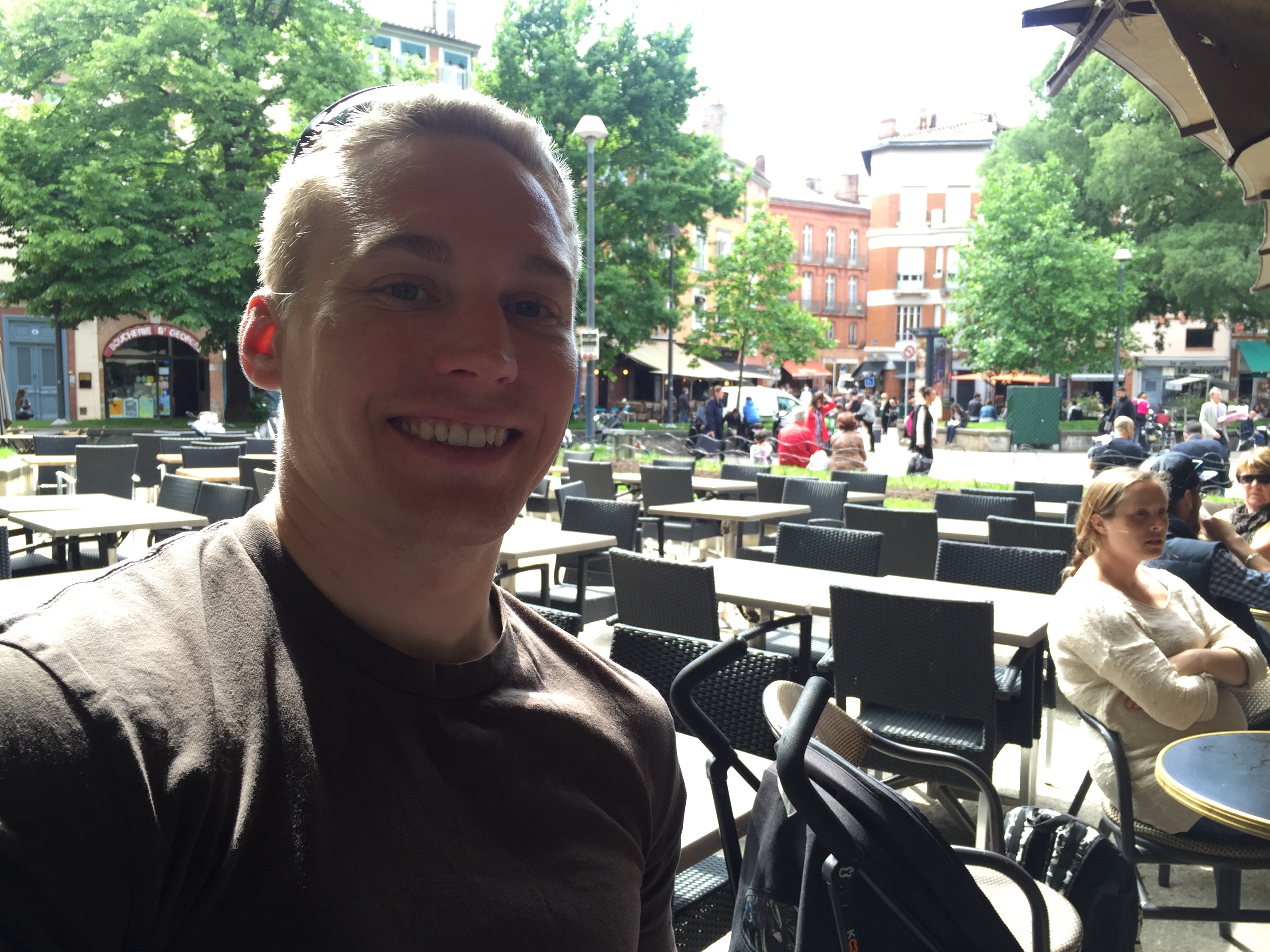 I realized more than a half week in to the holiday that I had only taken pictures of food so far… so above is C relaxing in a plaza. That night we went to La Compagnie Francaise for some Italian fare, which definitely could give Italy some running for their money. I decided on a bellini, a burrata appetizer (seriously in love with that cheese now – fresh mozzarella on the outside and creamy fresh cheese on the inside), and a bleu cheese gnocchi (with seafood – again miss translating). 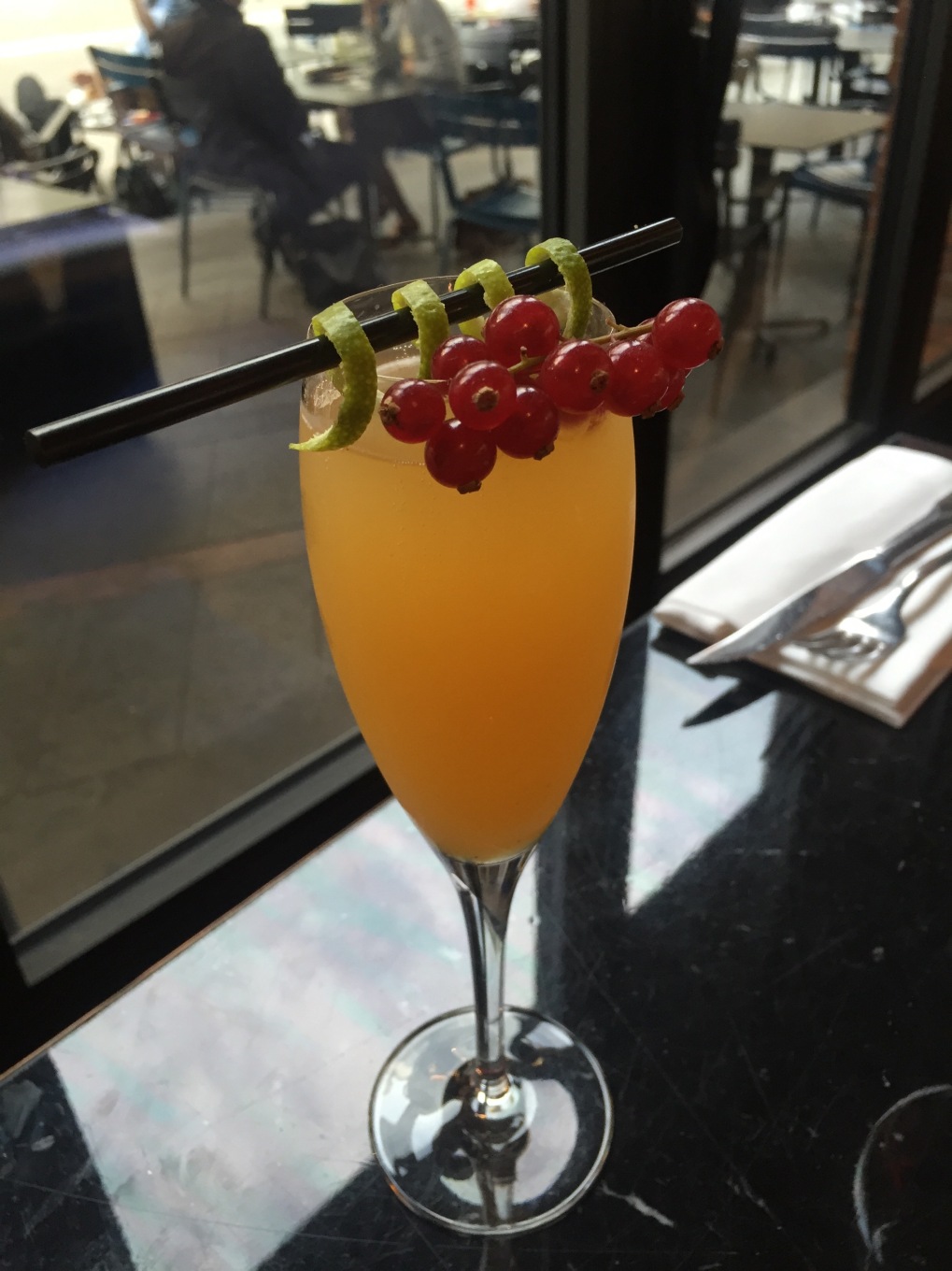 Of course we had to get macaroons. 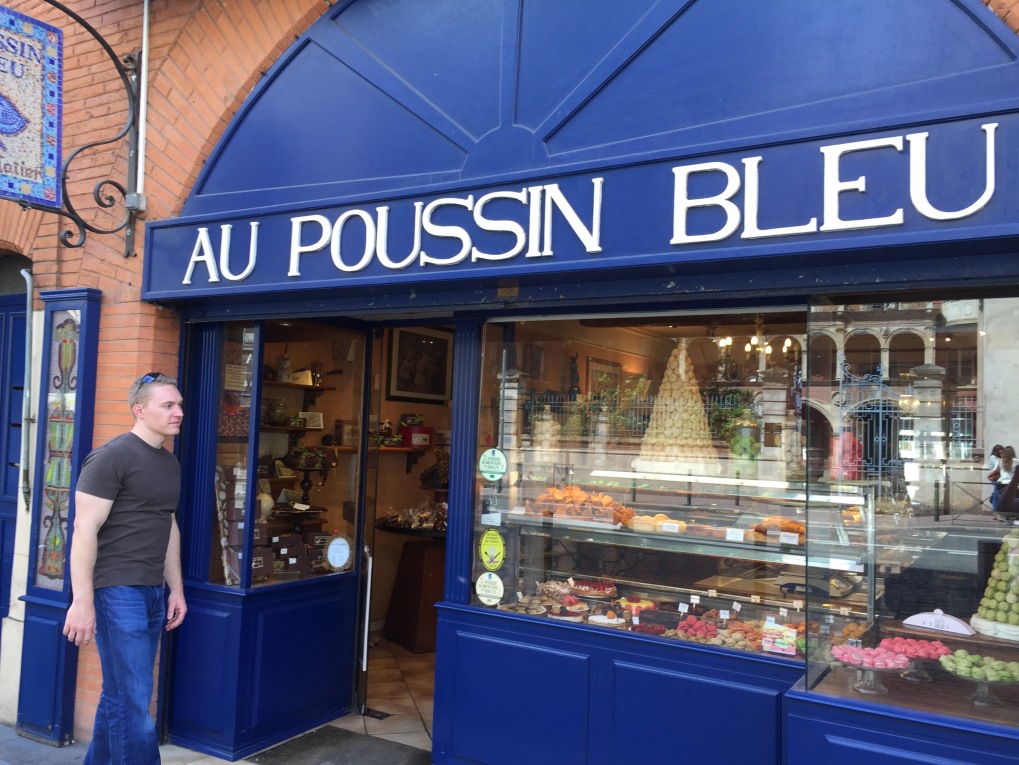 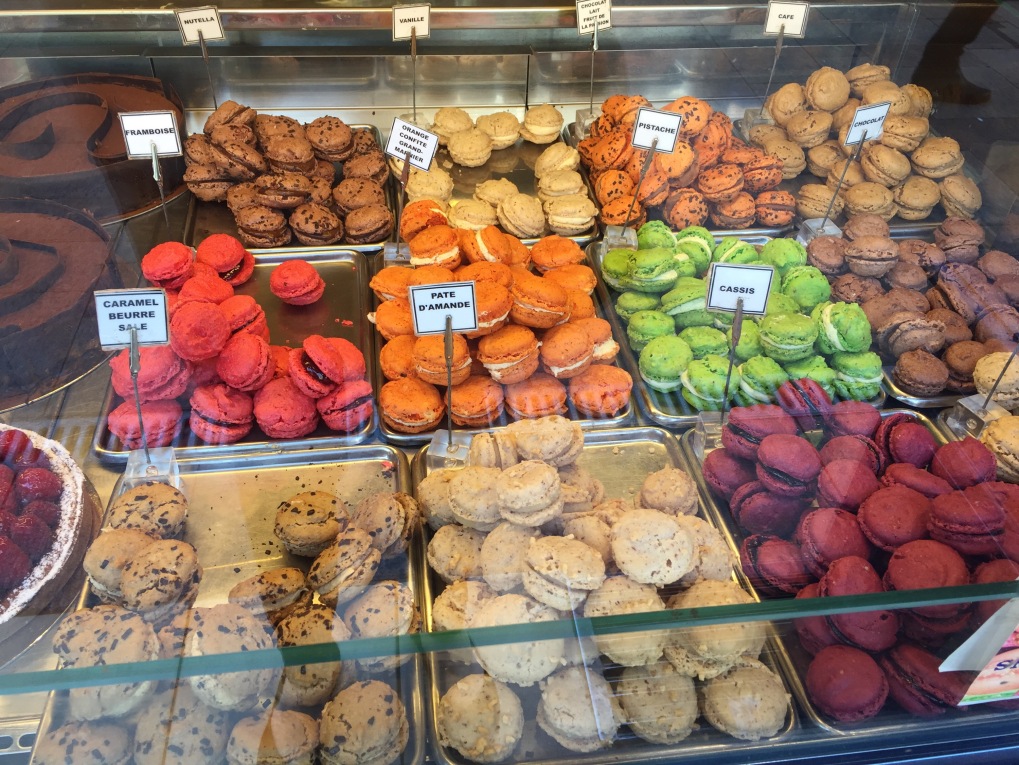 And ate tiramisu at least a few times during this trip – even if I might not share photos of every time. 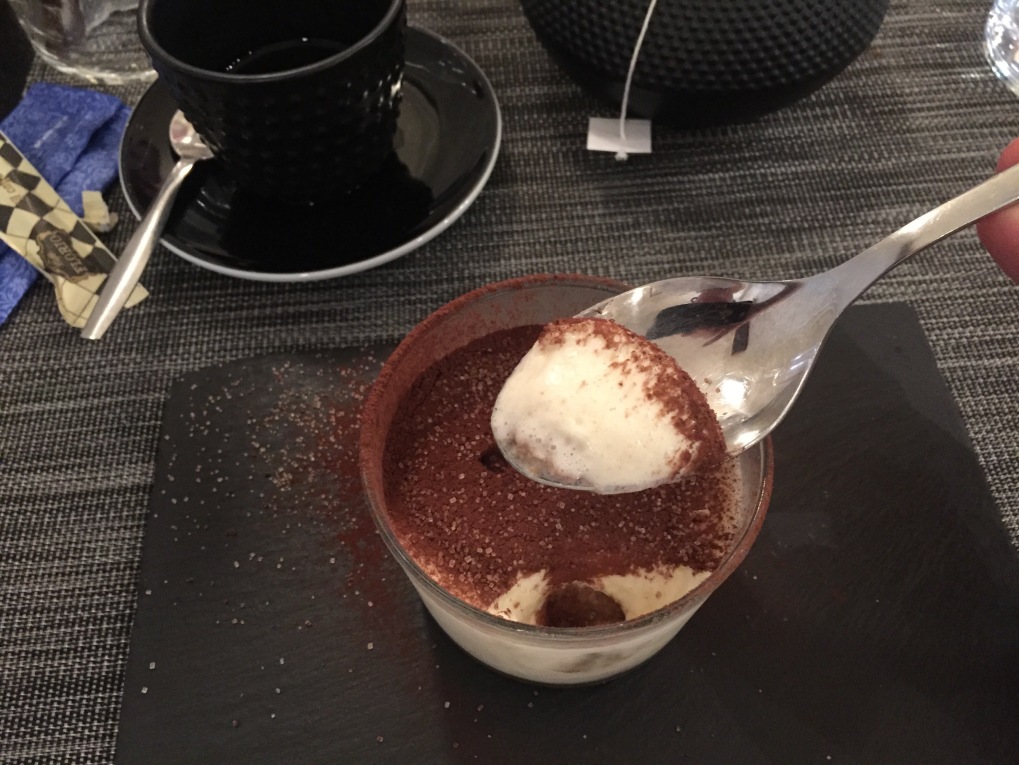 Ok, so I lied about the city pictures… here are a few more of the capitol square with a pop up market, river and countryside. 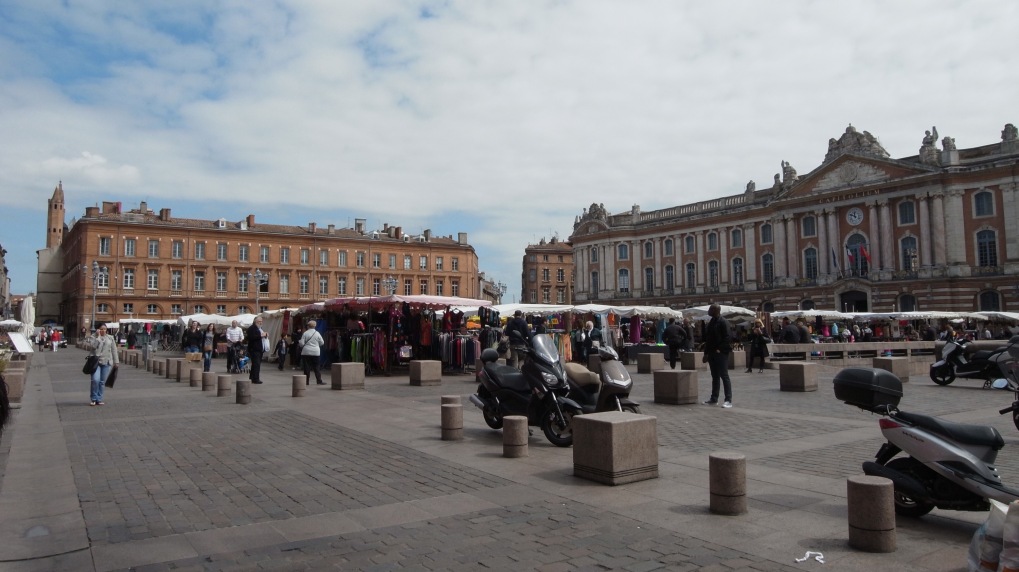 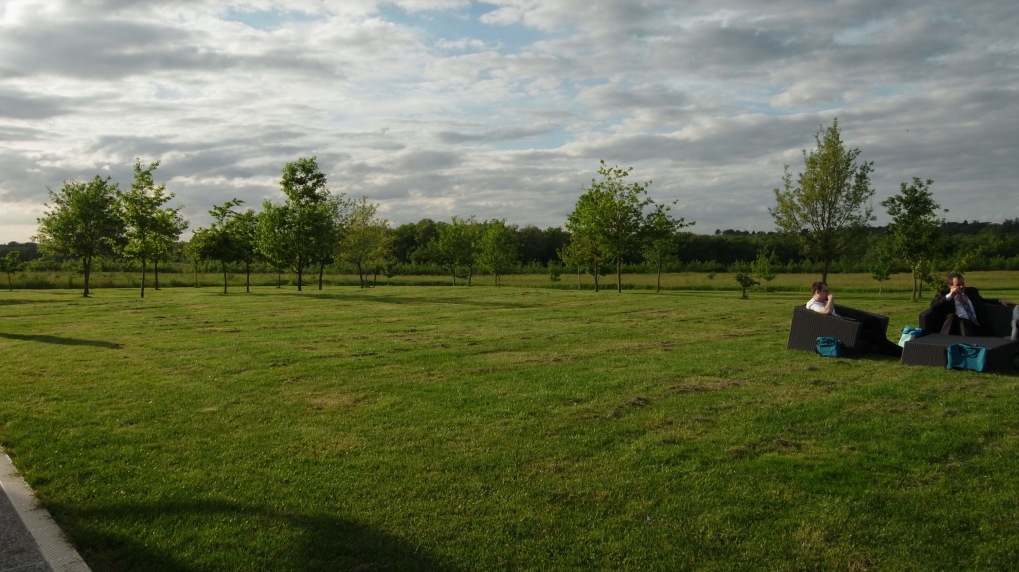 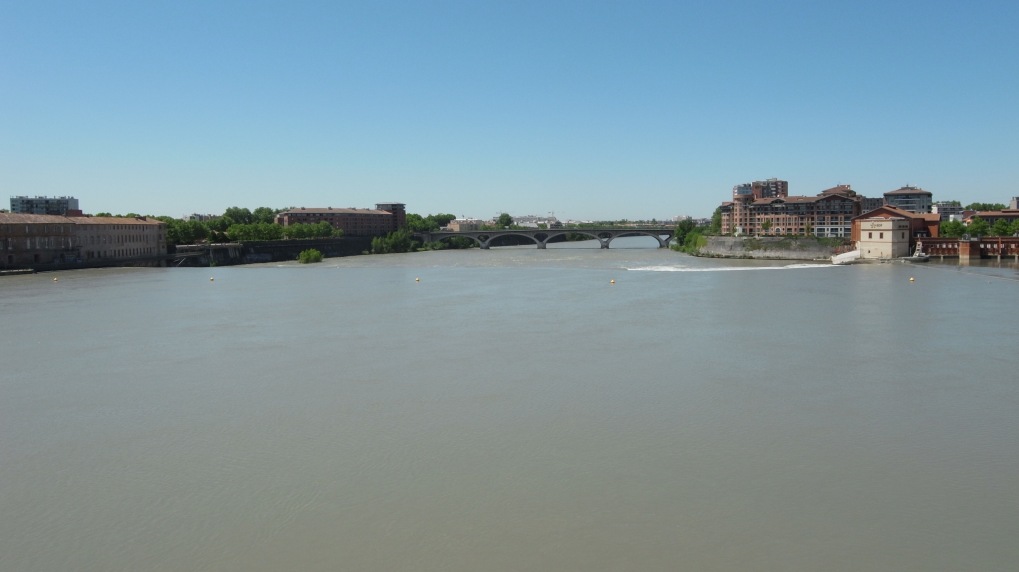 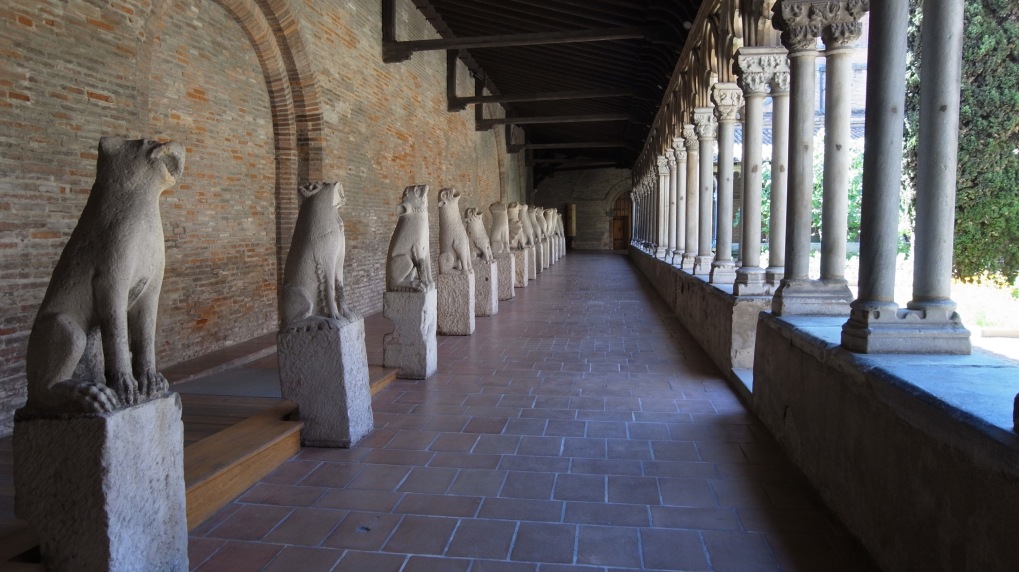 We had our last lunch at a recommended place that turned out really good.  I had trout with shaved carrots and rissoto – is there a theme here? I think I had fish at least once a day. For dessert I had creme brulee, which is actually the first time I’ve even eaten creme brulee – the real thing is tasty. 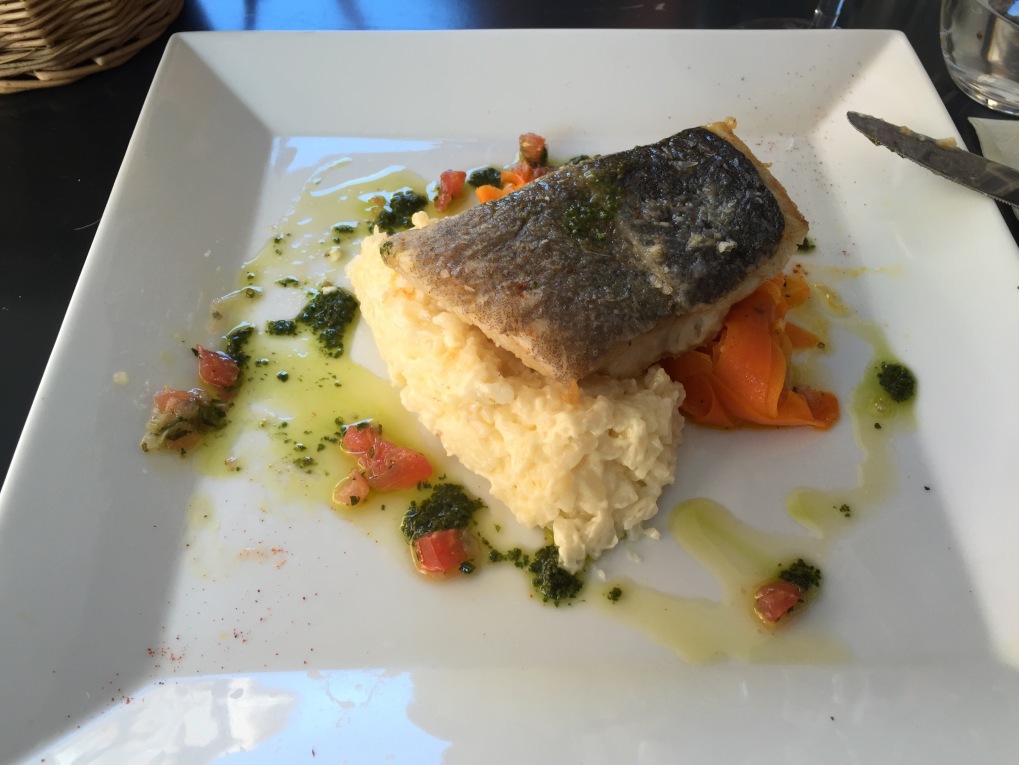 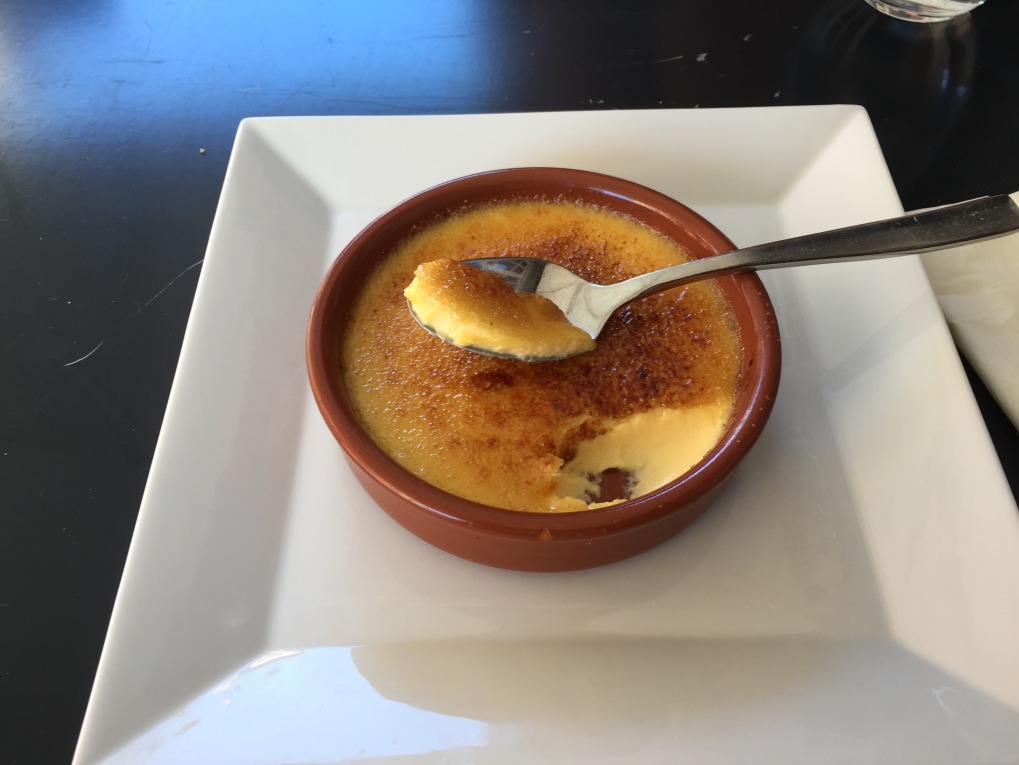 The last evening in Toulouse, we went to La Braisiere and had one meal I can not soon forget. For a entree (also know as an appetizer in the US) we shared a tricked out version of cassoulet which is a traditional bean type casserole with duck.  Ours were pea dumplings in a foi gras sauce – once of the best things I’ve ever put in my mouth.  What it lacks in visual appeal it more than makes up with in flavor. 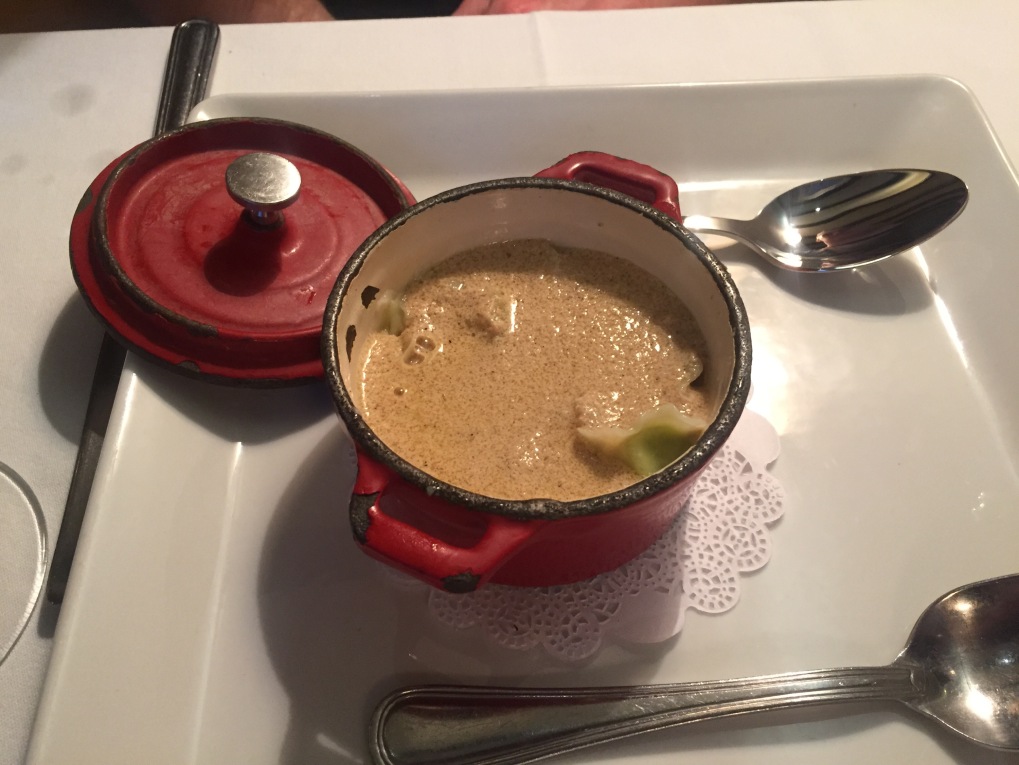 I went lighter on the main with a salad of greens with scallops and chorizo while C had a steak – one of the best ever he claims. 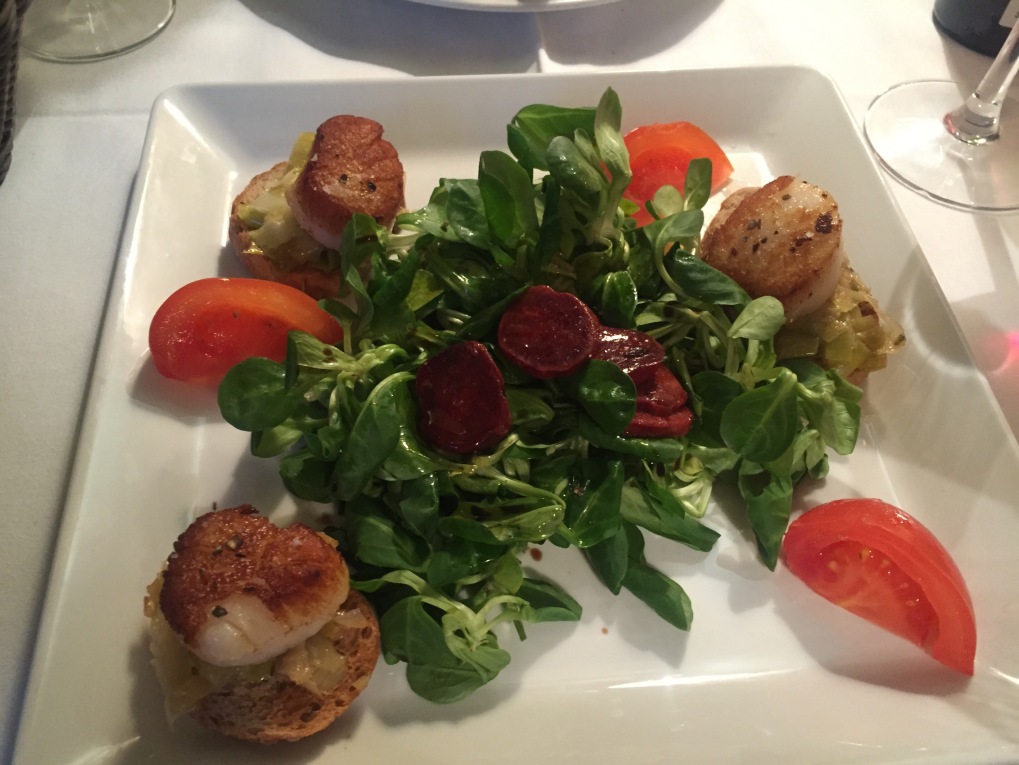 And finally dessert, again. I chose profitterols – ice cream inside choix pastry topped with chocolate… serious heaven. Naturally with every meal with had a bottle of wine.  Unfortunately rarely pictured but always delicious.

I thoroughly enjoyed my time in Toulouse and was so glad we started there. It’s more laid back than the major tourist attraction cities and just feels a little more like home.