Maybe it was winter, but my cooking/recipe slump feels like it is finally ending and I’m feeling the inspiration! Maybe the summer like weather here the past week has helped? 90 degrees in the first part of May. What!?

While re-testing a recipe for an upcoming event for work (I’m making my Lemon Lavender Energy Bites), I brought in the samples to co-workers and they correctly noted that the energy bite dough would make an awesome crust for cheesecake. I made a mental note of this and then went forward to try and determine if a baked or no-bake cheesecake would be best for this. No-bake was the obvious answer since the crust is also meant to be mainly raw. The filling is slightly tangier than a normal cheesecake, so you could just call it a tart, but I’m going to stick to my guns on this and say cheesecake. 🙂

The base of the crust is ground, roasted pistachios and almond butter (in addition to the flavors of lemon and lavender) but a small difference from the regular energy bites is that I incorporated some coconut oil and less almond butter. I think the coconut oil hardens up a bit better and allows the crust to keep more of its shape when cooled. (Ignore the crumbs below – I was a bit over zealous in diving in for a bite.)

A bit about the food grade lavender. I get mine from a local farm, Los Poblanos, but the great thing now is that they ship nation-wide and have a whole bunch of other boutique body products. And another side note – their restaurants is super super delicious – I’ve been for breakfast, brunch, and dinner and always want to go back. They built a new restaurant onsite and just re-opened in the new place within the last year. If you have a chance to visit  Albuquerque, NM, I totally recommend visiting their Farm Shop for the lavender and restaurant, Campo, just to eat… and I suppose stay overnight in their inn too if you can.

But back to the food. 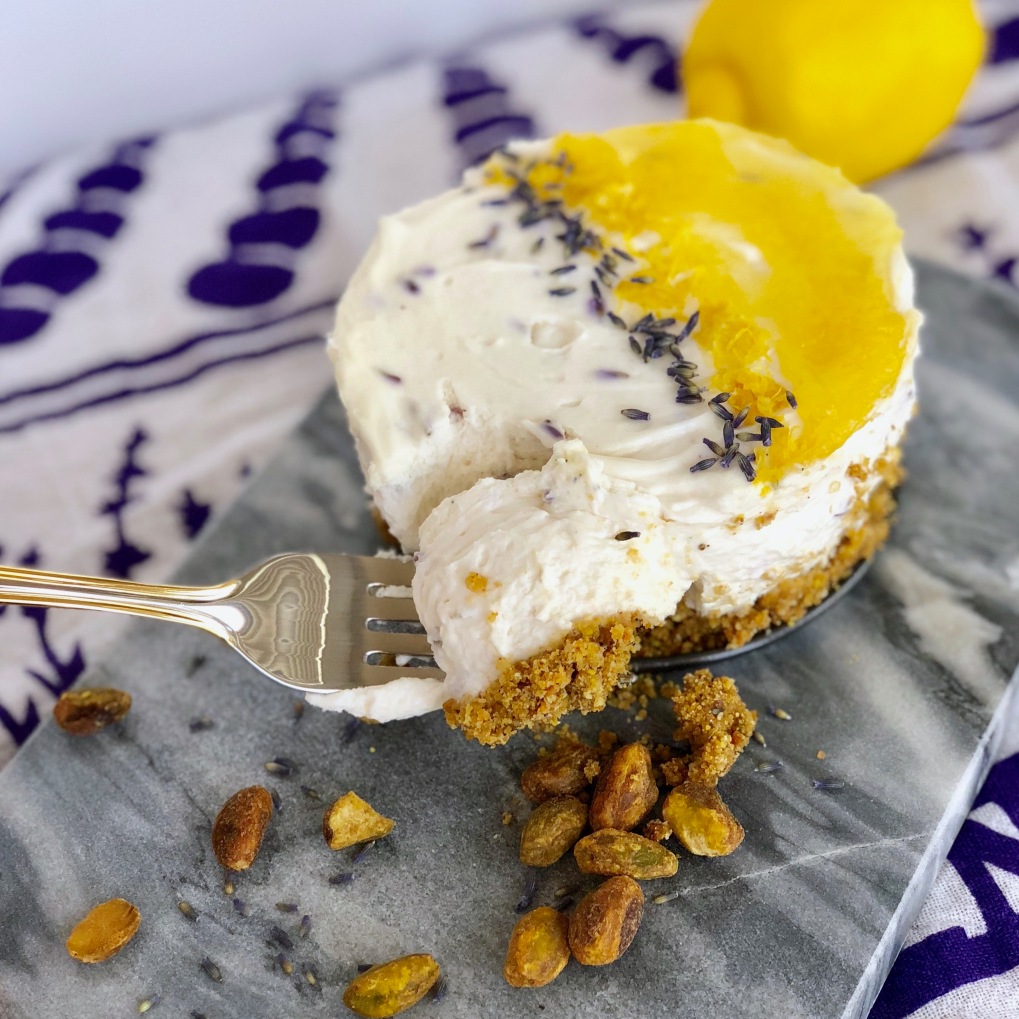 Lavender and lemon just scream spring and summer to me, but when I went to the store looking for some lemon curd (and you can totally make your own BTW), I was told it was seasonal – Thanksgiving. Hmmm. For me lemon can be used all year round, but is particularly bright like summer. I guess you learn something new everyday. 🙂

Enjoy and I’m glad to be back in the realm of creating recipes again!

It might be fall, but I’m still obsessing over peaches, especially the ones I can grow in my own back yard! That’s right, we have a fabulous peach tree that grow giant peaches – like the kind you need to grab with two hands. Even though I massively hacked and pruned the tree earlier that year (like I thought nothing would grow back and we’d have this ugly stumpy looking tree), but it still branched out all over the place and we had peaches everywhere – even after C took half off at the start of their growing. We removed some so the others get more nutrients and grow bigger.

So after having a refrigerator full of peaches, I thought why not do some sort of appetizer with them – I had some left over ricotta and we always have honey, so a super easy snack was born. 🙂 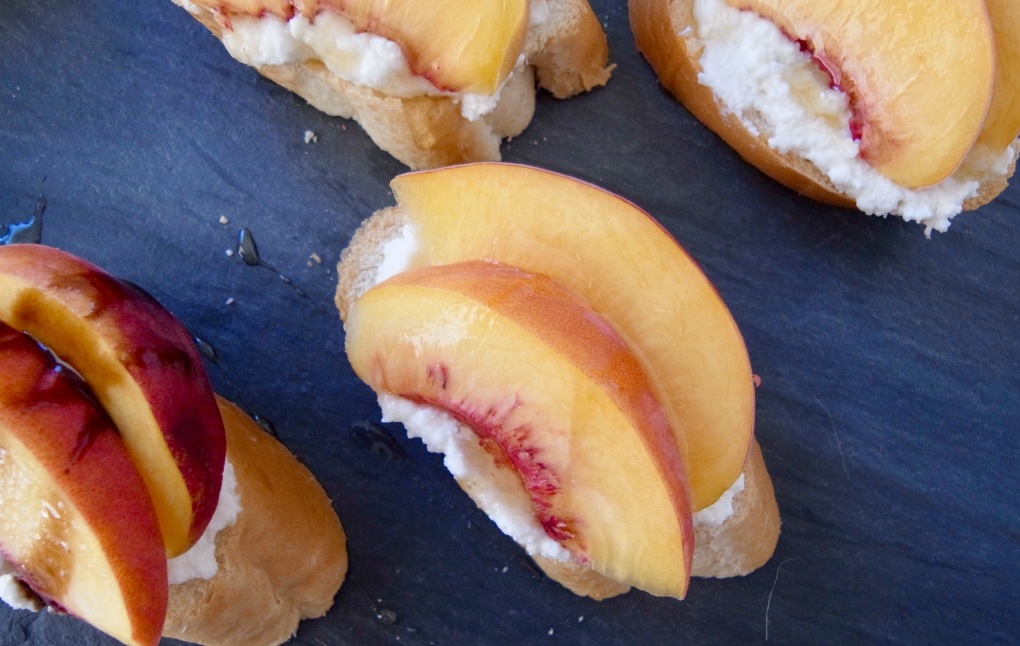 Eat and enjoy! Preferably with some wine.

It’s my 4th summer in this house and each year I’m enjoying the fruit produced more and more – peaches, apples, and figs. After finishing the creation of the patio and fencing around it, I’m also enjoying the backyard more and more – when I’m out there, it really does feel like home. When everything is put away (a wind storm tore down our temporary pergola), I’ll post a video of the space – we have a waterfall too and the sound of falling water is just so relaxing! 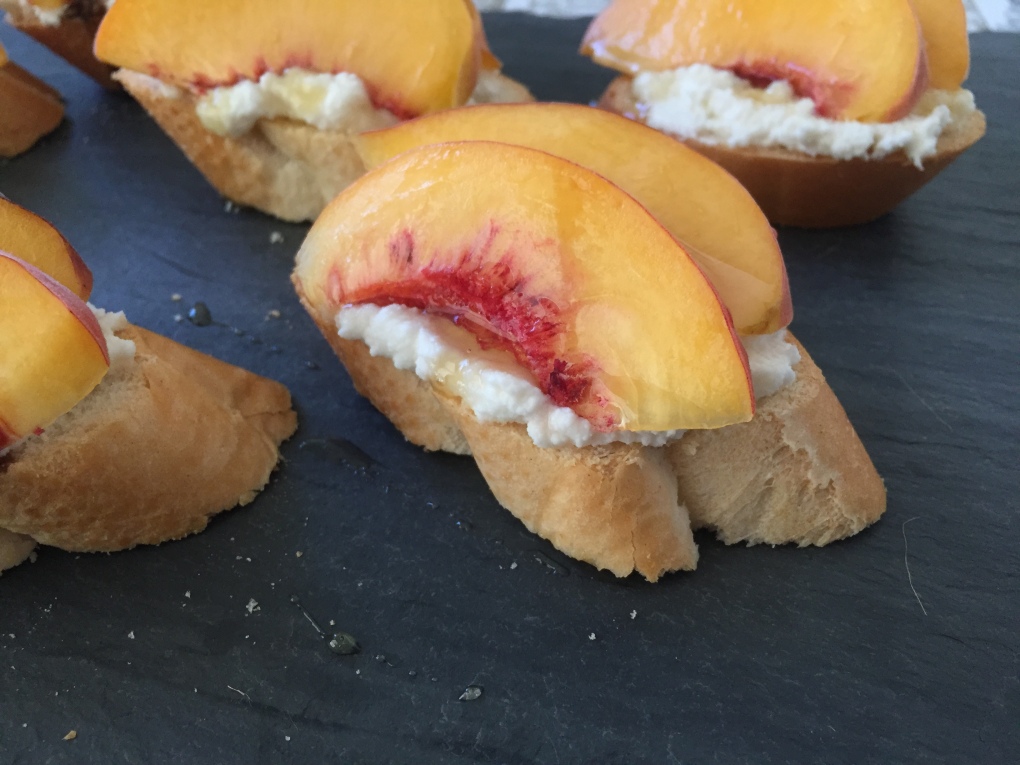 Cheers to the ending of summer and the beginning of fall!